In today’s Nytimes there’s an article about the 24 hour grand opening of the new Blanton Museum of Art on the UT Campus. And they mention the improv show I’m in tonight starting at Midnight. 10 improvisers have been hired to give mock tours of the art museum. We get to pretend we are docents and give totally fictional commentary and background information on the exhibits at the museum.

Here’s more of the article:

AUSTIN, Tex., April 26 — Austin has no shortage of cultural fare. It proclaims itself the “live music capital of the world,” serves up excellent Tex-Mex cuisine and is home to that most important element of Texan society, the Longhorns football team. But for a midsize city, Austin has been curiously lagging in the visual arts. 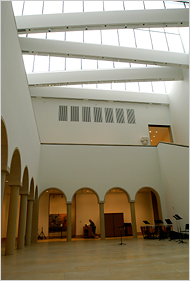 At the Blanton Museum in Austin, set to open today, the entrance is through an atrium bathed in natural light.

That is soon to change. This weekend the Blanton Museum of Art, which houses the fast-expanding modern and contemporary Latin American and North American collections of the University of Texas at Austin, will open a graceful and impressive new gallery building. A 24-hour marathon grand opening begins on Saturday night at 9 (and includes “Improv for Insomniacs” at 3 a.m.).

A Meeting of Mindsby Shana MerlinRecently my brother asked me for some advice. His company was planning a meeting on...