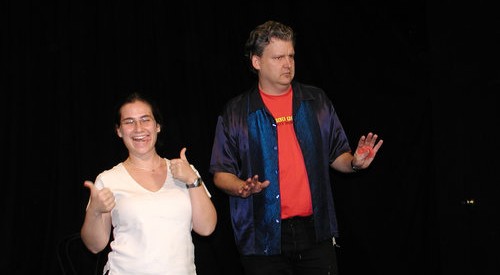 The Austin-American Statesman ran a great piece this weekend on the history of the Austin improv comedy scene, leading up to the new Moontower Comedy and Oddity Festival opening this week. It covers a lot of ground including the defunct Big Stinkin’ and the development of the AIC. Features quotes from Jeremy Sweetlamb, Shana Merlin, Andy Crouch and more.

“You can look at the history of comedy in Austin and it tracks pretty closely to the Austin economy,” notes Shana Merlin, an improviser with the musical troupe Girls, Girls, Girls. “There have been boom-bust cycles within the comedy scene that have tracked very closely with the boom-bust of the tech scene.”

There’s even a slide show with photos from Austin Comedy in the 80’s, 90’s and 00’s. Including the gem above.
Become a part of Austin Improv Comedy history, sign up for an improv class today!
Categorized: School News

back to main Registration for summer classes is now open!Charna Halpern + Del Close = The Origins of Longform Improv