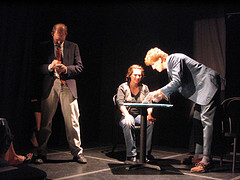 The Role of the Audience
in Improv Theater

But she didn’t listen. My troupemate thought she had snagged a prime seat. “I never sit in the front row of an improv show. “ I said, my voice trailing off as I headed up the risers.

And about three scenes in to the sketch comedy show from New York City, after the preacher character finished his frantic, bigoted rant, my friend had been sprayed with spittle, sweat, and a little bit of blood, then hit on for good measure. I saw it all from the safety of the back of the theater.

So, I have my reservations about audience involvement. When I am an audience member myself, I’m often extremely hesitant to participate in a show. I think this is mainly because I perform a lot and there’s a code among comedians to let the true audience have the experience of shouting out suggestions and volunteering to get on stage. If a performer gets involved you can look like a plant and you’re taking away a fuller experience from a paying audience member who doesn’t get to do this kind of thing all the time.

Also, I’m often uncomfortable with the way the audience is treated in a lot of performances. My basic feeling is that without the audience, none of this theater stuff is possible. So you should treat them like an honored guest. You dress up for them. Clean up before they get there. Make sure they have something to drink and are comfortable. Give them breaks to use the facilities. And basically treat them like it’s your grandma coming to visit— be on your best behavior: eye contact, handshakes, smiles, pleases and thank yous. I feel strongly about being a gracious host, especially at the theater.

On the other hand, some of the best theatrical experiences of my life have involved audience interaction. I will never forget watching Michael Joplin’s Blue High Machine Mid-Southern Wrestling Coalition, jumping up and down at my seat in the theater, screaming at the top of my lungs for The Pretty Boys to take down Duke Rooster.  Before the show, amateur wrestling would be the last thing on my must-see list, but there I was, raging like a 12 year old boy in the WWE audience.

On the other end of the spectrum, I remember seeing Eddie Izzard in his Tony Award-winning role in The Day in the Death of Joe Egg on Broadway.  Midway through the show, I thought the play had actually broken. It seemed like they had gone off script and they were having to make it all up with us to keep the night going. Only when I got home and read the New York Times Review, I saw that the critic had the exact same experience at the theater I had, but months earlier.

Or at one of the earliest improv shows I ever saw, Brainwaves Improv from Portland interviewed my Dad about my family and played out a dead-on scene about our life. It was so shocking and hilarious, it was hard to catch my breath: me and my sister Mia portrayed as conjoined twins, my Mom calling out to my Dad, “Cary are you in the basement messing with those computers again?!” It was like they were spying on us with a hidden camera.

Or the opening night of Cops and Lawyers, and improvised Law and Order parody I was in, where the audience served as the jurors at the end of the show. They were given five minutes from the judge to come up with their verdict, and the theater exploded in to conversation about all the clues they had seen throughout the last hour of performance.

I find these moments of interaction and engagement are some of the most memorable moments I have experienced in theater. And it’s one thing theater can offer that other forms of entertainment can’t. A movie will always be more visually stunning. A book will always be better written. A traditional play or musical will always be more polished. But in live improv—we have the audience there. And we can offer an experience that they have never had before, specifically tailored to that crowd on that night. We can engage them so they become co-creators in the show, and feel like they are part of the magic.

I’ve been thinking about the role of the audience a lot lately because we’ve been in rehearsals for The Known Wizards, an improv troupe made up of Merlin Works faculty and friends. We will be headlining the new Merlin Works Improv at ZACH, Second Sundays at 8pm. In preparing for our debut at the Grand Opening on January 13th, we’ve been playing with what format we want to do. And the question that has been floating around my head for ages is how do we combine the best of short form game play and narrative longform? How do we keep the satisfying narrative arc and rich character work of narrative longform (an unscripted one act play) while not losing the audience involvement and the anything-could-happen feeling of a short form (Whose Line Is It Anyways-style) show?

That is precisely what we are attempting to do in our first Known Wizards show. It feels scary, so I think we are on the right track. We are hoping to give the audience just enough power so we don’t know what is going to happen at any point during the show. And that thrill should make for something fun for everyone in the room.  We have such amazing and experienced improvisers in the group; I trust that it will all come off beautifully.

Please join us for the Grand Opening of Merlin Works at ZACH January 13, 2013. Party at 6pm. Show at 8pm.Get your tickets now!

back to main Introducing The Known Wizards: Merlin Works Faculty and Friends TroupeJump into the New Year with two FREE intro to Improv classes!
We have Online SHOWS, too! Watch The Known Wizards and special guest troupes via Facebook Live! September 13th guest troupe -- The Knuckleball Now!

The Merlin Works Faculty has come together to form The Known Wizards, the all-star troupe that will be headlining our...