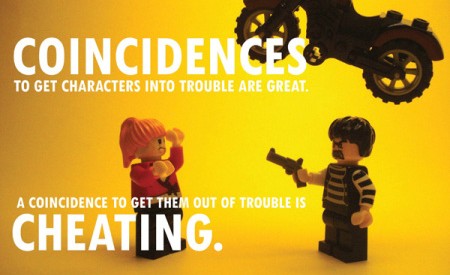 No Coincidence, No Story

Did you hear “No Coincidence, No Story” this weekend on NPR? OMG! So did I! You must have listened to theThis American Life episode where they compiled a bunch of stunning coincidence stories.

For example: A pair of thrift store shorts Michael purchased in California turn out to have his name on the label–sewn on by his mother when he was a kid in New Jersey 15 years earlier.

In the podcast about all these happenstances, they mention an old Chinese saying, “No coincidence, no story.”

And all these fascinating stories got me thinking about how we improvise good stories partly by making coincidences happen. How do we make coincidences just happen?  And just what is a coincidence anyways?

I think a coincidence is when something comes up repeatedly or simultaneously, seemingly by accident. It can be because of our fuzzy understanding of statistics: “OMG! We have the same birthday!  What are the odds?!”  (50% in a group of 23 people, in fact.) Or our self-centered point of view: “I never saw all those VW Cabrios everywhere until I started driving one. Where were they hiding?!”  Or they can be downright eerie: what are the odds that the garbage collector had the same name as my sister’s boyfriend, found her note in the trash and accepted her invitation to “come on in?” Okay, his name was Kevin so it wasn’t THAT wild.

There’s a thrill when you are involved in a coincidence—a feeling of being in touch with greater forces, or that things are happening for a reason. I personally don’t believe everything happens for a reason in real life. But for the purposes of improv and storytelling, I sure do! Every offer, idea or character is there for a reason, we just might not know it yet in the scene.

So how do we create coincidences? Why, with my favorite improv trick—repetition! It can be as simple as an improv scene in a coffee shop. Gloria enters and orders a half-caf latte with cinnamon. Roger enters and orders a half-caf latte with cinnamon. The same order! This isn’t a scene about ordering coffee—it’s the beginning of a romance! Or long lost siblings! Or the science fiction story with the doppelganger robot androids! But it’s a story and the audience is hooked. We wanna know why fate has brought these two together.

The great news is, this is one of the simplest, stress-free ways to play. By repeating words, ideas, movements, themes, we create intriguing circumstances that the audience wants to explore. After Gloria and Roger’s meet-cute in the coffee shop, they begin a grand romance: first, the kiss at the putt putt place behind the hippo hole. Then, the awkward meet-the-parents moment when they hear way-too-detailed stories of childhood allergic reactions. The mix up in his work parking lot where Roger thought Gloria forgot to pick him up. The pregnancy scare during that mini-holiday at the hill country inn and the seemingly endless three-week break they took after that. Followed by the daily deliveries of lattes to Gloria’s office for weeks until she agrees to see him again.

Coincidences can be great for setting a story in motion. But as you can see, the character’s emotions, skills and efforts need to be used to resolve the story. These days deus ex machina can feel a little cheap, as you can see in this image from Pixar Story Rules in Legos. But coincidence is can be very useful when going for a satisfying ending, or button to the story. We cap off Gloria and Roger’s story when we see them reuniting at the putt putt place, confessing their love. It all pays off when they come together at the coffee shop and, with a ring on her finger, she orders two half-caf lattes with cinnamon, for here.  Aw.

The same repetition creates coincidence principle is true for us in our own lives. If we fixate on something, repeat it in our minds and words, we will start to see “signs.” Things will come to our attention that can’t just be a coincidence. It must be evidence! So, if you’re gonna see more of whatever you repeat to yourself, my suggestion would be to repeat positive things. That way good things are more likely to find their way to you. And the world will continually present evidence of its benevolence.

back to main See the Merlin Works 301 Graduation Show: Second Sunday Improv at ZACH!Merlin Works Teacher Spotlight: Kevin Miller
We're delaying the start of our summer session by two weeks. We hope you'll be able to join us then.

The Merlin Works 301 Imps Have Done it! They Graduated! And They Can Fly! Sunday, March 10th 8pm Kleberg Theatre...