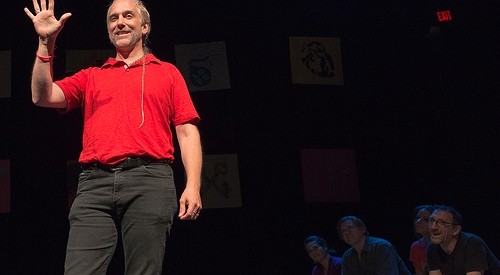 So I was hanging out backstage with Richard Garriott, local video game tycoon and self-funded space traveler, along with about 20 other comedians. I noticed that nobody was talking to Garriott, either because they were all catching up with each other at the annual Out of Bounds Comedy Festival or they wanted to give some space to this Austin celebrity. I figured it was a unique opportunity and decided to chat him up. We quickly discovered that we both had young children at home. He showed me his iPhone, with a picture of his precious little girl on the case. I eagerly pulled out my phone to show him pictures of my handsome little man, with visions of playdates on private jets racing through my mind. I opened up my photos on my phone and showed Richard Garriot…

a close up of pee pee in the potty… a photo I’d snapped of my son’s first time.

I turned red, laughed nervously joining in with the titters of some onlookers, and quickly flipped to a much cuter photo of my boy at the playground. Luckily, I’ve had lots of training on letting things go, so I was able to bounce back, have a good conversation and lots of fun in the Stool Pigeon Show at The State Theater that night, improvising scenes based on some amazing stories Garriott shared with the audience. I am grateful that I had that memorable experience that night and that it became what many of these temporarily terrifying moments become: a great story.

Story is essential to the kind of improv that I do.  In Improv 101 we spend two weeks on storytelling: from using the Story Spine to create beginnings, middles, and ends to the Reduce Reuse Recycle method of storytelling–using a few ideas repeatedly to great effect. One of the first topics we cover in storytelling is called Meet the Monster. Taken from the work of Keith Johnstone, I put students in pairs and have them act out an adventure starting in the forest. The only trick–they have to take turns telling the story a word at a time. Their first stories usually go a little something like this:

Walking through the forest we see a lion. Aah! The lion is big and roars. We turn around and run.

Then I tell them to do the activity again, except this time they story can have any ending that isn’t escaping the danger. So the second round looks like this:

Now, what is the difference between Story 1 and Story 2?

Story 2 is more detailed. We have to stall, and we fill in details in the meantime. That makes it more vivid for everyone–the storyteller and the audience. And everyone gets more invested.

Story 2 was more exciting. There was danger, suspense, friendship and adventure. Story 1 just had the running.

This demonstrates the joy of Meeting the Monster–going towards the danger in the story. The improv world is different from the real world. In the real world we spend most of our time trying to avoid danger and keeping safe. I’d rather not be hit by a bus today. The improv world is the opposite. The audience pays to see us be brave, face dangers, and be changed by what happens to us. The dangers might be literal–like a lion–or emotional, like a breakup scene. One of my early improv teachers from Dad’s Garage Theater in Atlanta told me, “In real life, if you see a naked man behind a bush, turn and walk away. In improv, if you see a naked man behind a bush, find out what his name is.” Or as Keith Johnstone puts it more succinctly, “Which is the most famous ocean liner?”

Stories are about people being changed. And going towards the element that might change you will lead you to great adventures. It’s also great practice for real life. As we get repeated exposure to making different choices in our scene work than we would in real life–I’ll stand up to my boss in this scene, I’ll confess to my best friend that I’m in love with her, I’ll open the door to that haunted house–and we come out the other side relatively unscathed, we get more comfortable with these kind of choices in real life. We can start to distinguish real dangers from opportunities and experiences that might change us. And we can start to have some real adventures.

I can’t tell you how many students I’ve had that have come to class because they were stuck–in the wrong job, relationship, or self-image and find their way out of it after a few months of classes. They start making new choices, seeing new possibilties, and taking new risks. And before you know it they are in new careers, getting engaged, or sadly for me, moving away.

So in the new year, what monsters are you going to encounter? Are you up for meeting them this time? Find out the name of that naked man behind a bush. Or maybe you’d like a little more practice with me in an improv class.

back to main Ring in the New Year with the FREE Improv Mixer!Merlin Works Presents: Improv at ZACH Second Sunday Comedy Showcase! (On the third Sunday of the Month!)