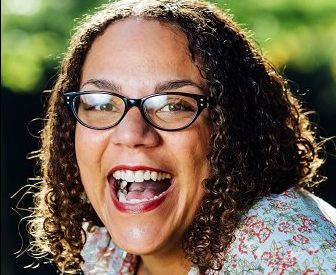 Natalie Meyersick is the most recent Merlin Works student to be awarded the Diversity Scholarship. The Merlin Works Diversity Scholarship was created to foster diversity both onstage and off. It primarily aims to further open the world of Austin Improv to people of color, though individuals who identify with any minority background, culture, or community are welcome to apply.

Natalie did some improv back in high school and found it to be something she really enjoyed.

“I found it to be a way to be carefree and expressive without having to think much and just go with what you are feeling in that moment,” she said.

“I identify as a woman of color (though I didn’t fully accept that for a long time) with a unique background as a military brat and the child of parents that identify as white conservatives (and maybe don’t see or want to see me as different from them). This has given me an interesting perspective on the matrix of experiences that define race and gender relations in our culture,” she said.

“It’s only in the last few years I’ve really become fully aware and accepting of where I stand in relation to those complicated intersections, though I’ve studied them objectively in the past it’s taken some time to really internalize and process,” she said.

She has found that the more she exposes herself to diverse groups, the more she is able to work on and maintain balance in her life. And also become more aware of “all the amazing intersections, the complicated nature of life and the general beauty of humanity,” she said.

She recently traveled to Washington, D.C. and was struck by the diversity of that city in comparison to Austin. She found her travel to there refreshing and hopes that when others see her, they also see that they can do anything no matter how they identify or what they look like.

“While I love this city (Austin), there is something powerful about representation and seeing people of all races, ethnicities, and religions doing all the things in all the places,” she said.

Natalie also feels that improv can have a powerful effect in actively undoing negative stereotypes “by requiring you to work past fear and those negative internal voices,” she said.

This stems from being a plus-size woman and “like many women of all sizes I’ve internalized a lot of negative messages, fear, and shame due to my body,” she said.

Even now as an adult, seeing different types of people in the media is having a positive impact on her life.

“I wish I’d had more examples of women of all races and body types growing up,” she said.

back to main What Is Your Comeback Story? Resilience in the Merlin Works August 2018 NewsletterChanel Geter: Merlin Works diversity scholarship recipient late summer 2018