Awww shit. We’re finally gonna talk about all the rated R stuff that can happen in improv.

In the first days of Improv 101, it’s often a question hanging in the air: can we say potty words in here? Sometimes it’s not just hanging in the air because a student is so excited to try out all the hilarious curse words and uncomfortable situations they’ve been storing up for their new improv class. 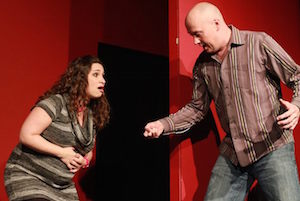 And maybe you’ve seen one of my shows where I’ve done or said some pretty racy things. Like the show I improvised a love poem that ended with… uh… or I was in a fight scene and used a butcher’s knife to…well… Or the time I played a super villain who abducted the hero’s romantic interest, tied her up, shrunk myself down and then… er…

Well, see, the thing is, writing about any of these situations nowin my business newsletter feels really wrong. My gut is telling me not to do it. Why? Because it’s all about context. That’s the short answer I tell my students when they ask me if they can “go blue” as we say in comedy. If the situation demands violence or off color language, by all means, go ahead.  But if you’re forcing it in to a scene where it doesn’t belong, skip it. Just for a treat, I’ve included some photos of edgy moments from my shows over the years. You can fill in the blanks with your imagination.  What’s so bad about going blue? I’m a huge fan of Jerry Seinfeld, who famously plays clean and has a great perspective on the topic.  “A person who can defend themselves with a gun is just not very interesting. But a person who defends themselves through aikido or tai chi? Very interesting.” Basically, he knows that using bad words and vulgar situations is a cheap shortcut and working without them forces him to play on a higher level.

I’m also a huge fan of Louis CK, who famously does not play clean. He still manages to use the top of his intelligence and cover challenging and interesting topics with all kinds of dirty language. So it can be done well, but it can easily be overused and become a crutch. Here’s some of my pointers for when to get dirty and when to stay squeaky clean.

WHEN TO GO THERE: 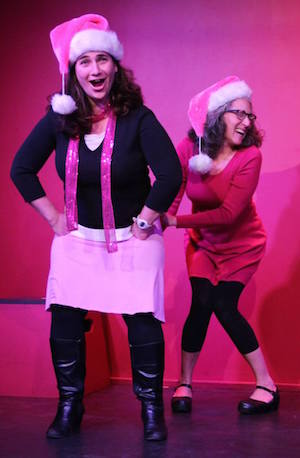 When it serves the story or the scene. Sometimes making a choice to be violent or vulgar is the best possible decision in a moment of the scene. Take a classic Platform Tilt scene where Charles is looking to rent a room in Alicia’s house and is there to meet her and take a tour. Everything is great–nice room, friendly people–until he hears a scream from offstage. So a minute later in the scene, when Alicia ties Charles up and whips him until he signs the lease, it’s an obvious choice that fits with what’s been established.

When it serves the character. Cursing is going to come from a dirty cop in an interrogation scene or a mafia boss talking to his underlings. There even might be a lot of it as the characters establish themselves and try to get their point across. It would be strange for them not to. It’s great to play villains and be brave enough to be unlikable. It can make the audience experience emotions of disgust and root for our hero even more.

When it serves the emotion. In that breakup scene when Arturo finds out his girlfriend Marsha has cheated on him, it makes sense for a few key phrases to spill out of his mouth. Cussing is a way of expressing heightened emotion–especially anger and surprise. It’s also can create and interesting contrast when a moment later he’s begging her to not to leave him.

When you have trust, boundaries and rapport with your fellow players. The better you know each other, the further you can go. That’s part of the reason there isn’t a ton of rough language in introductory level improv classes. People don’t know each other and we aren’t sure of everyone’s boundaries and triggers. The safest and most inclusive choice is to work in the PG territory. But when the players are more advanced and cast in a show together, such as the ensemble in Showdown, the Deadwood-inspired dark western series I was in, most scenes contained violence and cursing (of a delicious antique flavor.) And in rehearsal we worked on stage combat, created boundaries for sexual situations, and studied the source material so we were ready to go on show day. 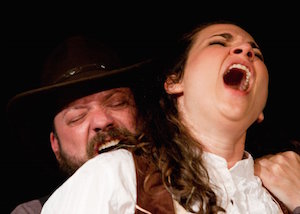 When everyone in the room is grown up. Be cool, dude. If there’s kids in the audience, keep it clean. Or let your audience know in press materials or clearly at the top of the show that is a performance intended for adults so they have the option of leaving before they get more than what they paid for.

WHEN NOT TO GO THERE:

Because you think it would be funny. Trying to be funny in general is a bad idea in improv. It feels forced and often falls flat. Funny is a great side effect from being in the moment, listening and responding. Relax and let the scene happen. If you really love cursing or want a time to explore a risque situation on stage in front of people, you might want to try it in your stand up act or your one woman show. There’s even a perfect place for that in Austin–No Shame Theater.

Because you are nervous or afraid. It can be a panic response in people who are feeling nervous. Maybe you are trying to get a cheap laugh or protect yourself in some way. Breathe. Relax. It’s not needed. Dare to be boring. Tune back in to your scene partner.

Because you want to make other people afraid/uncomfortable and assert your power. Improv is a team sport and this discomfort comedy isn’t a great choice with people you’re not familiar with. It’s not chivalrous and people will be less likely to join you on stage next time. Remember class 1 is all about being fun to play with and making each other look good. 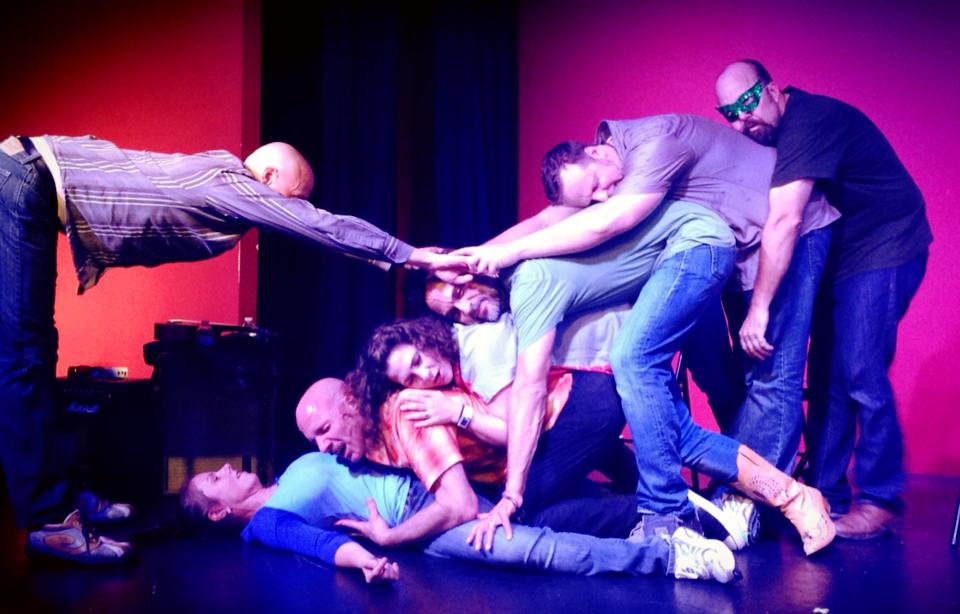 All that being said, there’s always the exception to prove the rule. Sometimes there’s nothing more adorable than an out-of-context or unexpected curse. It’s one of my signature moves, used sparingly. I’ll be playing a modern-day kid or an ancient queen and a totally inappropriate phrase comes to mind and slips right out like a little gem. And now it’s one my son has started too, and I can’t stop laughing. I decided it was too funny to discourage. So I’m delightfully living with a foul-mouthed toddler for the moment. Shana Merlin
Founder, Merlin Works